The mysterious case of the man with the Victoria Cross 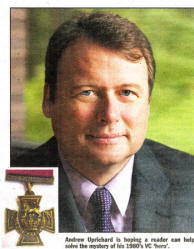 JOHN Alexander Sinton (1884 - 1956) was not the only Victoria Cross recipient to links to the Lisburn area. In his book titled 'Irish Winners of the Victoria Cross' Richard Doherty makes reference to a Daniel McCambridge, who was born in 1820 and came from County Antrim. He enlisted in the Royal Artillery on the 24th June 1839 having attested at Lisburn four days earlier. In 1857 he was awarded the Victoria Cross for actions during the Crimean War. Locally, the search continues for more information on another Victoria Cross winner - Samuel Hill born in the Glenavy area in 1826. He was awarded the prestigious medal for his actions during the Indian Mutiny at Lucknow in 1857 whilst a Sergeant with the 90th Regiment. He was killed in action in 1863.

There were also enquires recently into another VC winner - Charles McCorrie. He has been listed by some sources as hailing from the 'Killeard' area of County Antrim -probably Killead. He was a private in the 57th Regiment during the Crimean War and was awarded the Victoria Cross for throwing over the parapet a live shell which had been thrown from the enemy at Sevastopol in 1855.

Recently another mystery has emerged.

Andrew Uprichard, who has lived in Boston from 1981, is currently the President and Chief Executive Officer of GliaMed, a biotechnology company in the USA, but he grew up in the Drumbeg area. Many will remember his father, the Reverend Horace Uprichard who was rector there between 1953 and 1982.

Andrew claims he was a fairly regular visitor to the Casualty Department in the Lagan Valley hospital, due to his love of motocross bikes!

In adult life he returned to the Hospital as a doctor performing the role of pre-registration house officer in 1981.

Andrew had attended medical school in Edinburgh and had returned to Northern Ireland. After his time at the Lagan Valley Hospital he spent a year at the Royal and a further two years in the Belfast City Hospital, carrying out research into sudden cardiac death and studying under Professor Shanks who also• came from Lisburn. In 1987 Andrew continued his research at the University of Michigan in the United States where he has been ever since. He later joined the pharmaceutical industry and was involved in the development of Lipitor, a cholesterol-lowering drug.

He has just penned an article which he has titled 'My Hero' which has been published in the Ulster Medical Journal. It concerns a patient who had been admitted to the Lagan Valley Hospital during the time that Andrew was houseman there sometime between August. 1981 and August 1982.

Andrew recalls treating an elderly male patient who had been admitted late one night to a rear ward in the hospital.

During treatment of an unconnected nature he noticed the man had a significant injury to his left tibia. Andrew was curious and asked about it. The patients told him he had received the injury at the Dardanelles during the First World War, describing how he had been injured by bullets and shrapnel, although it did not deter him bravely overcoming the armaments of the enemy -Turkish Troops.

He claimed to have won the Victoria Cross for his actions and he told Andrew he was the last surviving Irish recipient from World War 1.

Andrew had asked the gentleman where the medal was and if he could see it. Sure enough the following day an elderly woman, believed to be the man's wife, opened a small box containing a medal inscribed 'For Valour' with a purple ribbon.

Andrew's patient recovered and was sent home but left a lasting impression on the young doctor. He hadn't turned the medal over to see a name inscription and he cannot recall the patient's name, something which he regrets.

Later Andrew's curiosity got the better of him and he decided to embark on some research to see if he could identify the old gentleman who had been his patient many years before.

His search proved to be fruitless. There did not appear to be any men of Irish descent who matched the profile of the patient he had once treated. That was a major disappointment to Andrew. In fact his illusions were almost shattered when it was suggested to him that perhaps the elderly gentleman had made up the story, in order to elevate himself and impress the young doctor.

Andrew was told it would not have been the first time a veteran faked tales of heroism whilst in battle, usually to gain attention.

It is certainly a mystery, and one that Andrew would like to solve. He thinks the gentleman may have been from the Dromore or Dromara area, but he cannot be certain of that.

He hopes that someone reading this may be able to throw some light on the mystery veteran who claimed to have been awarded the Victoria Cross for his actions at the Dardanelles.

He concludes his article - "...part of me still wants to believe he was a hero, VC or no VC, so I can glow in remembering when an old man with a bad leg lifted the spirits and imagination of a tired young doctor."

Sometimes truth is stranger than fiction.

If you can help Andrew please contact The Digger at diggerarticle@hotmail.com or by contacting the Ulster Star Office, Bow Street, Lisburn.