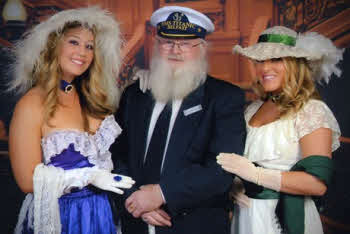 Samuel Rollins dressed as Captain Edward John Smith during his recent cruise to remember those who perished in the Titanic disaster. Samuel is pictured with other passengers who dressed up to mark the 100th anniversary.

A FORMER Lisburn man who now lives in New Zealand recently marked the 100th anniversary of the Titanic sinking by going on a cruise in New York leaving from where the ship berthed and cruised to Halifax Nova Scotia, close to where it sank.

Sam Rollins dressed as Captain Edward John Smith while many of the other passengers wore costumes as well.

Sam said: "I went on board the cruise ship the Azarama Journey leaving from where the Titanic would have berthed and cruised to Halifax Nova Scotia. I, along with others, went to view the the graves of some of those who perished in the Titanic disaster: We then left for the area where the Titanic struck the iceberg arriving at the very time 100 years ago."

He continued: "A memorial service was held indoors where all 1503 names of those that were lost were shown on a TV screen. Three candles were lit during the service and hymns and sermon preached by the Reverend Lawrence. This service took about two hours and then the passengers went outside to an open deck where another service took place. All this was to correspond with the time 100 years ago from the time the Titanic hit the iceberg until the ship disappeared below the waves."

Speaking about his experience Sam said: "I would say that the night on April 15 2012 would have been similar to that of April 15 1912. It was very dark and no moon and calm. At the time the Titanic sank 100 years ago, two wreaths were blessed and were thrown into the ocean, at this time a deep sadness and emotional feeling came over me as I visualised the sight of many bodies with life vests on floating on the ocean and the panic onboard the Titanic as it was sinking with all those still onboard and the lifeboats being rowing away with women and children and some men. I am sure that many others felt the same as there was complete quietness."

Sam added: "I made a phone call from my stateroom to my eldest sister Joyce to wish her a happy 80th birthday - being able to do that two to five miles above the wreck of the Titanic, was incredible."

As the titanic would have been sinking below the waves 100 years ago, a group of musicians came out on deck onboard the Azarama Journey, the cruise ship that i was aboard, and played that beautiful hymn 'NEARER MY GOD TO THEE'. There were about 7 musicians all dressed in style as would have been all those years ago and similar musical instruments. This was all very emotional and all onboard remained very quiet.

A family re-union for a well travelled son of Lisburn

Move down under Sam has never regretted